With SAINT OMER, acclaimed filmmaker Alice Diop delivers a riveting and utterly unmissable courtroom drama. The film follows novelist Rama who attends the trial of Laurence Coly, a young woman accused of killing her 15-month-old daughter. As the legal proceedings move forward, the words of the accused along with witness testimonies begin to shake Rama’s convictions and call into question both her judgement and that of the viewer. 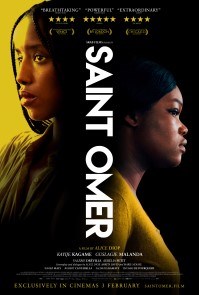